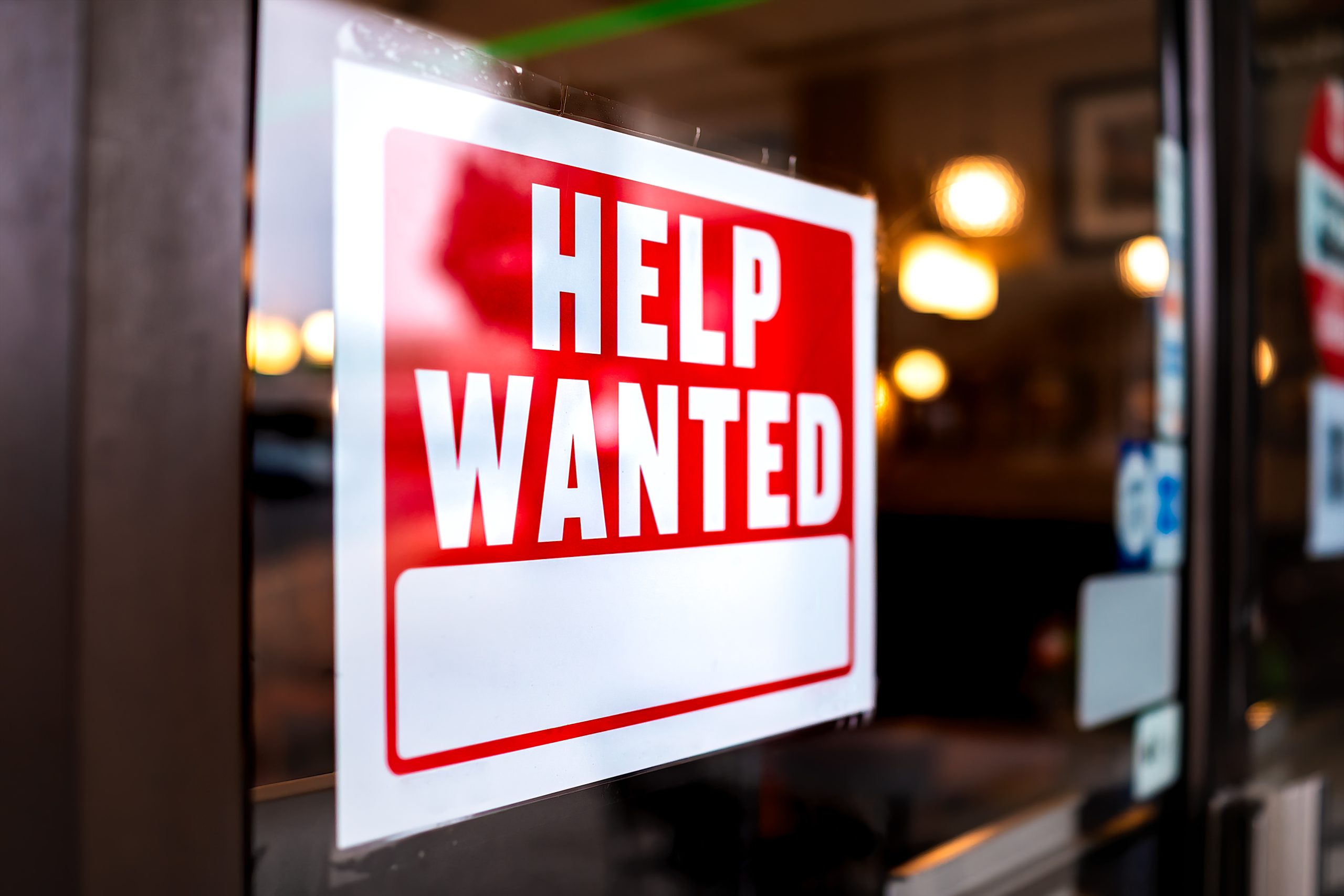 Welcome to the February edition of HR hot topics!

This month, we’re talking data – specifically workforce data. I’ve touched on this in prior episodes – what we’re looking at are the current labor shortages we’re seeing as a result of COVID. I want to give an update on that, but I also want to step back and take a much longer view at the workforce and what we as Michigan employers can expect in the next 5, 7, or 10 years. Currently in Michigan, we have 190,000 fewer people in our workforce as we did when we compare it to pre-COVID numbers. February of 2020, as compared to now, there are 190,000 fewer people in the workforce, and you’re feeling that, right?

When you look at who is sitting in that 190,000 person bucket, it’s predominantly women, millennials, and minorities. And part of that is because of the industries that were most hardly impacted by COVID, whether it be from shutdowns or they took the slowest amount of time to recover. And those industries employed those three groups of people in higher percentages. Another reason we’re not seeing nearly as many women in the workforce as we did in February of 2020 is because of childcare. You’re probably well aware of this.

If you have employees with children, you know COVID has created havoc on any sort of predictable schedule. You either can’t find daycare because there aren’t as many daycare personnel as there were before the pandemic or people have left the industry all together.

Or, if you have your kid in daycare and somebody gets exposed to COVID, all of a sudden daycare shuts down unexpectedly, and somebody has to stay home with that child. The same things are happening in schools too. A great deal of women have left the workforce and are not back in it because these requirements and constraints are still pulling at us. So that’s what’s happening right now.

Another staggering statistic I’d like to share with you is the labor participation rate or the workforce participation rate. This is something that’s tracked – it’s tracked at the state level, it is nationally too, but it’s a number that reflects all folks eligible to be in the workforce, how many of them are actually working or looking for work. You want that number to be as close to 100% as possible, because that means you have a robust labor pool to pull from in Michigan. Our current labor force participation rate is 59.5%! Just let that number sink in: 59.5% of Michiganders who are eligible to be in the workforce, meaning they’re of the appropriate age and they’re not institutionalized in any way, right? Less than 60% of them are actually in the workforce. We rank 41st in the nation for that percentage. While that’s obviously lower than the national average, it’s lower than previous Michigan rates too. So this number just keeps dropping and that’s why we feel it right now. It’s so tight. It’s so hard to find folks, right?

But as I said at the start of this episode, I want to step back and take a longer view on this. One of the largest segments of our work force currently are baby boomers, right? It’s a huge generation, 60 million plus people are in the boomer generation and in Michigan, they make up about 22% of our workforce. Currently, that’s a pretty significant percentage. And many of those boomers are set to retire in the next five or seven years, right? Maybe as long as 10, if you’re lucky.

Now, some of them retired early because of COVID. So we’re already starting to feel this impact a little bit, but 20%, right? 22% of Michigan’s workforce made up of that generation looking to retire in the next five to 10 years will leave 1 million vacancies in our state. 1 million. Now, whether a job held by a boomer today is still a job that’s open in 10 years, who knows what happens with automation and technology, but still 1 million jobs. We only have 10 million people in our state folks. This is huge.

So, where are we going to find the talent to replace the individuals who will be leaving the workforce? Well, this is where the news doesn’t really get any better. The birth rates in the US have dropped for the sixth year in a row. Michigan’s feeling that so we don’t have as many people being born to replace this large generation in Michigan, the number of folks that are immigrating into our state is dropping, dropping, dropping and the net population growth is dropping.

When you look at the folks who are are leaving Michigan voluntarily – maybe they were born here, raised here, but have now decided to take a job outside of the state – of those leaving, the median age is 30 years old and 45% of them have a college degree. We’re exporting our own talent and we don’t have enough numbers just through other means to replace what we have. And then again, you layer on top of it the number of vacancies that we’re expecting to see down the road, guys, this is a huge, huge problem. It’s not specific to COVID, and it’s not going to get better anytime soon. We need to start thinking about not only how to make jobs attractive right now, because it’s fiercely competitive out there, but we need to start thinking about down the road, how are we going to find talent to fill some of our positions?

I want to just share a few ideas here. In the short term, I think we have to evaluate the current openings that we have, and we have to determine whether or not what we’re offering aligns with what the current job seeker wants. Now I’m going to read you the statistic. This made me laugh out loud. This is in the US; it’s a national statistic. The number of prime age men willingly opting for a part-time job jumped from 6 million in 2007 to nearly 8 million in 2019. This was before the pandemic. Okay, so the pandemic sort of exacerbated this, and this was particularly relevant or prevalent among men ages 21 to 30, who were voluntarily working 200 fewer hours per year, according to the national bureau of economic research. And that decrease in hours worked for men in this category exactly mirrors the increase in video game hours played. These men voluntarily decreases their time spent working or pursuing professional development in order to increase their leisure hours. 75% of which were spent playing video and computer games. Now that’s an extreme example, right? But you have heard over and over that job seekers of today want different things than the boomers currently sitting in those roles wanted and expected out of work.

We’re talking about balance, right? Whether you spend the other portion of your day playing video games, if that’s what balance means to you or whether it’s child rearing or just time with family or travel or whatever it is, folks aren’t necessarily looking to work the same number of hours or in the same way that they were historically.

So as employers, we can have all sorts of opinions about that, but if that’s the labor pool we’re pulling from, we do have to make some adjustments. So a position that used to be full-time held by one person – if it’s still full-time hours, you might consider hiring two part-timers so that they can job share because flexibility might be really important to them. You still get the work done, you just get it done differently. Maybe remote work or what can be automated, right?

We’re going to have to make a lot of decisions. But I think as you look down the road too, we have to start thinking about our workforce. Expecting that folks are going to come out of some sort of training certification or college prep program and just be ready for you to pick, that’s not the case. College admission rates are declining too across our state. So that’s just not the case. We are going to have to create training programs in our own places of employment in our own industries to find individuals that want to work and are capable of learning a new skill.

Then, we’re going to have to be the ones training them. So connections with high school programs, right? Apprenticeships, co-ops, job shadowing, all of these things that we used to do before college entrance rates jumped through the roof. We just kind of expected college to do that for us. We’re going to have to revert back to some of those tried and true strategies in order to capture the workforce that we need going forward.

That’s what I meant when I said “pick your head up and take the long view on this.” COVID is shining a light on labor shortage issues, but regardless of what happens with COVID, I can tell you based on these numbers, this is our reality for the foreseeable future. And we need to start adapting now. I’m going to link some of these videos in the message so you can look into it. I think it’s fascinating and terrifying, but we can’t fix the problem if we don’t know their problems. So, this is my public service announcement to all of you today. This is coming and we need to start preparing for it now.

I’ll leave you with that, and if you have any questions, you can reach me at Jodyschafer@workwithhrm.com, and until then folks, I’ll see you in March!